Lally Takes the Podium at 2020 24 Hours of Daytona 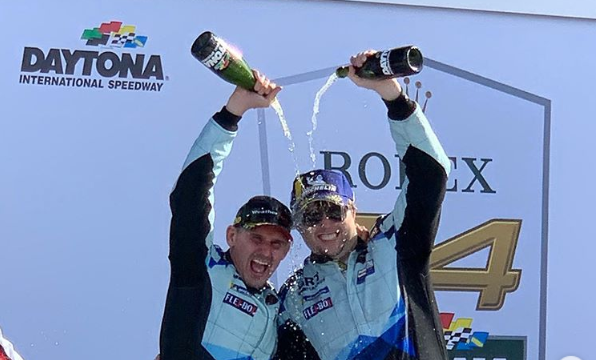 Founder Andy Lally and the GRT Magnus Team took their spot on stage at Rolex 24 last Sunday, making it Lally’s tenth podium at the Daytona race. In a post on Twitter, he praised and thanked his team—including co-drivers Spencer Pumpelly, John Potter, and Marco Mapelli—saying, “Our crew, teammates and car were flawless!”

The optimistic side. We finished second by 16 seconds after a 24 hour, flat out sprint race. My tenth podium at Daytona. My fourth second place finish and a good solid points day. Thank you @MagnusRacing. Our crew, teammates and car were flawless! Congrats @paulmilleracing !

The Rolex 24 at Daytona kicked off the 2020 season for GRT Magnus Racing, with new partnerships and a fresh livery for the Lamborghini Huracan GT3 EVO.

A fight from the start, the real battle began as the sun set on Saturday with the No.44 GRT Magnus Lamborghini closing in to take the front position from the No. 48 Paul Miller Racing Lamborghini. Magnus came close multiple times, but Paul Miller kept ahead throughout the night.

Then as the sun rose on Sunday morning, Andy hopped in the driver’s seat and plowed into Po.1 with an 8 second lead ahead of Paul Miller Racing. With less than an hour remaining, the team had to give up position for a pit stop, and were unable to regain Po.1 before the checkered flag, finishing in Po.2. This shows how important mere seconds can be—even in such a long race.

Although Magnus did not take home their Rolexs this time, they have shown us how competitive they will be in this year’s IMSA WeatherTech SportsCar championship. Stay tuned for more updates as the season continues!

As a co-founder of ALIVE, Andy brings the same energy, excellence, and commitment to performance to the digital products that serve the industry he is a part of with a team just as powerful as the one that gets him through the next lap.

Andy Lally ALIVE® is a digital marketing and technology company that delivers an ecosystem of customized solutions, services, and unique marketing and technology products that support the automotive and motorsports industries. We serve fans and enthusiasts looking for a cohesive experience in their passionate pursuits, as well as businesses looking to reach the unique audiences that the automotive and racing industries represent. Learn more at andylallyalive.com.